PARISOL (Pacific Rim Solidarity Network) is a Chinese and Chinese American anti-capitalist, Chinese/Chinese-diaspora organization for revolutionary international solidarity movement building based in Seattle. They created a fundraiser to support their upcoming summer organizing trip to China, and asked me to design a PARISOL t-shirt to sell online.

I created two designs based on the Chinese slogan 同一片海洋, which loosely translates in English to the hashtag #allonthesameocean. Using a parasol (or umbrella) as an icon was an easy design decision because of the group’s acronym and the perpetual rain in the Pacific Northwest. The members suggested that the designs include protest slogans to show solidarity with other, connected liberation movements in the US and abroad. I wanted to visually signal that PARISOL is a distinctly Chinese organization based in a majority-English speaking region, so I imposed a Chinese directional reading pattern (left to right, top to bottom) on the English phrases. 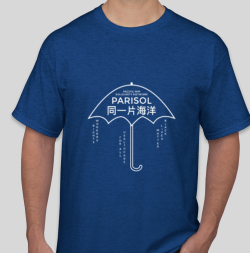 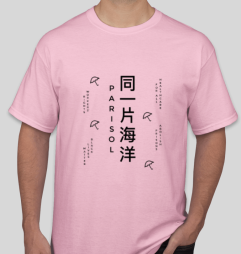